A Brief History of Studio Donegal 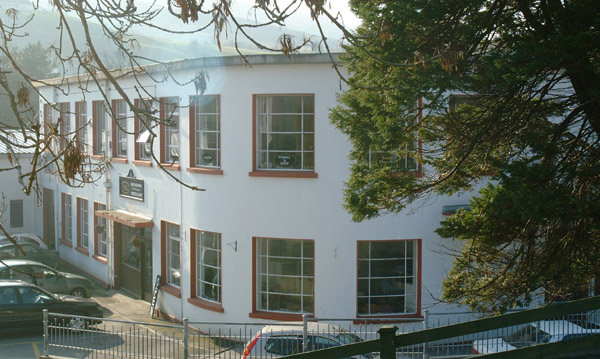 The first woollen mill on this site, Round Tower Tweeds, established in the 1930’s, continued the tradition of handweaving into the 1960’s when it introduced modern power looms. By the early 1970s all handweaving had ceased. A plan was put in place to move the operation to Co Galway, and a new brand, Connemara Fabrics, was created. A change of mind saw the mill continue in Kilcar, but the new name, Connemara Fabrics, remained. Two separate firms developed, in new purpose-built mills, one for the woollen spinning and one for the machine weaving, Connemara Fabrics.

By the late 1970s Connemara fabrics realised that something special had been lost with the demise of the hand weaving and so Studio Donegal was born. Kevin Donaghy was engaged to manage and develop the newly created Studio Donegal. It started in the old Round Tower mill buildings, which were almost derelict. The beginnings were humble, with the retired foreman hand weaver Michael Cannon returning to work on development with Kevin. Soon they were gaining interest with new products and Michael was training several young weavers.

In the 1980s, the textile industry in Ireland was in decline with mill closures all over the country. Connemara Fabrics was no exception to this and was finding the market increasingly difficult. In 1987 they decided to wind down Studio Donegal.

Kevin and his wife Wendy were determined to preserve the tradition of hand weaving in Kilcar, so they took the brave step of taking over Studio Donegal from Connemara Fabrics. They leased the old buildings and purchased the hand looms, and armed with courage and determination, set about achieving their goals.

The biggest challenge they faced was to establish & market. Kevin quickly realised that the way forward was to concentrate on creative design, build a brand, and let the market find them.

Today, Studio Donegal is a small woollen mill on the Wild Atlantic Way, with its own carding, spinning, hand weaving and garment making. The reins have been handed down to Tristan, Kevin and Wendy’s son, who now manages the business, which currently employs fifteen people, and is trading successfully whilst staying true to its core value of hand weaving all its tweed. Everything with the Studio Donegal label is hand woven and made in the mill in Kilcar, Co Donegal.

We use cookies on our website to give you the most relevant experience by remembering your preferences and repeat visits. By clicking “Accept”, you consent to the use of ALL the cookies.
Cookie settingsACCEPT
Manage consent

This website uses cookies to improve your experience while you navigate through the website. Out of these, the cookies that are categorized as necessary are stored on your browser as they are essential for the working of basic functionalities of the website. We also use third-party cookies that help us analyze and understand how you use this website. These cookies will be stored in your browser only with your consent. You also have the option to opt-out of these cookies. But opting out of some of these cookies may affect your browsing experience.
Necessary Always Enabled
Necessary cookies are absolutely essential for the website to function properly. These cookies ensure basic functionalities and security features of the website, anonymously.
Functional
Functional cookies help to perform certain functionalities like sharing the content of the website on social media platforms, collect feedbacks, and other third-party features.
Performance
Performance cookies are used to understand and analyze the key performance indexes of the website which helps in delivering a better user experience for the visitors.
Analytics
Analytical cookies are used to understand how visitors interact with the website. These cookies help provide information on metrics the number of visitors, bounce rate, traffic source, etc.
Advertisement
Advertisement cookies are used to provide visitors with relevant ads and marketing campaigns. These cookies track visitors across websites and collect information to provide customized ads.
Others
Other uncategorized cookies are those that are being analyzed and have not been classified into a category as yet.
SAVE & ACCEPT